There are few things I love more in life than reading a great book. I LOVE to read. The evidence to support this statement: I’m in three book clubs, I coordinate our school’s book fair and I volunteer in the elementary school library weekly. It’s a sickness, I know.

Christmas is fast approaching and the scramble for the perfect gift is drawing near. I thought I would share some of my top book picks for the children on your list – and maybe for yourself!

A Porcupine Named Fluffy by Helen Lester –Fluffy the porcupine tries to be fluffy like his name, but his ideas don’t work out so well. He tries covering himself in shaving cream and eating a whole bag of marshmallows, but nothing makes him fluffy. He feels sad until he befriends a rhinoceros who also has a very silly name. This is a sweet story about friendship and learning to laugh at oneself. The illustrations had my kids giggling out loud.

When Charlie McButton Lost Power by Suzanne Collins – Charlie McButton loves computer games. He loves them so much that when a thunderstorm knocks the power out, Charlie goes into panic mode! What is he going to do without electricity? He just might have to play with his little sister! Oh, the horror! I love this book because it stresses the importance of sibling relationships and of kids using their imaginations. And it’s funny and sentimental at the same time. 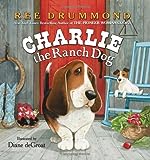 Charlie the Ranch Dog by Ree Drummond – Another book with a Charlie as the main character, except this time he’s a lazy basset hound! Charlie tells you about what life is like for a dog living on a ranch. He thinks he is a big help, but really…he just sleeps a lot. When I read this book out loud, I can’t help but read it in a low southern drawl. This book is great for dog lovers, people who like to read with a southern drawl, or people who like to eat (there’s a recipe for Charlie’s favorite lasagna in the back of the book. It’s good lasagna. Just saying.)

Edward Fudwupper Fibbed Big by Berkeley Breathed –Edward is a liar. One day he breaks his mother’s glass pig while playing baseball in the house and begins telling “fibs” so he doesn’t get in trouble. His lies continue to snowball until eventually the military is called in and a giant alien gets involved. This book is great fun to read aloud. There are plenty of tongue-twisters that your kids will love listening to you flub up. Try saying “all from an Edward Fudwupper fat whopper” three times fast! Berkeley Breathed is the creator of the comic strip Bloom County (remember that one?), so the illustrations in this book are hilarious and extremely well done. And of course, kids learn the importance of not telling lies, and a bonus lesson on being kind to your brother or sister. Who doesn’t love that?

It’s Not Easy Being a Bunny by Marilyn Sadler – I can’t tell you how many times I have read this book. My kids asked me to read it over and over – the mark of a great book, I say! I have it memorized. This is the story of P.J. Funnybunny, who doesn’t want to be a bunny anymore. He decides to leave home to visit other animals and to live and act like they do. He soon realizes that he misses his family and he really LIKES being a bunny. He doesn’t want to be “a bear or a bird or a pig or a beaver or a moose or a possum or a skunk. What he really wants to be is a bunny!” From memory. You’re impressed, I can tell.

The Allie Finkle series (6 books) by Meg Cabot – Nine-year-old Allie Finkle is trying to figure out the rules of life and friendship. These books are told in first person with each chapter title being one of Allie’s rules.  Some rules are funny – “Never Stick a Spatula Down Your Best Friend’s Throat” – and some are good life lessons – “It’s Important to Try Not to Hurt Someone’s Feelings If You Can Help It.” The Allie Finkle books address the topics of family, honesty and being a good friend. Allie is quite a character and the books are very entertaining. My daughter loves them! I have to admit, I love them, too. (Grades 2-6)

The I Survived series (6 books) by Lauren Tarshis – This series takes historical events and tells stories of survival through fictionalized characters. Some of the topics covered in the series are Hurricane Katrina, the sinking of the Titanic and the bombing of Pearl Harbor. The I Survived books make history come alive. Kids will learn about significant events in history and enjoy doing it! Learning is good. (Grades 2-5)

Cornelia and the Audacious Escapades of the Somerset Sisters by M. M. Blume – Cornelia lives in New York City and is the daughter of two world famous pianists. Her life may sound exciting, but it is actually very lonely. A glamorous and elderly neighbor named Virginia Somerset moves into the apartment next door and a friendship soon forms between the two characters. Virginia tells Cornelia stories of her amazing and humorous world travels with her three sisters during the 1950s. Her stories will take you on adventures to India, Morocco, England and Paris. We read this book aloud as a family and would look up the places the Somerset sisters traveled and some of the famous people they met along the way. The friendship between Cornelia and Virginia will touch your heart. I LOVED this book. Loved it. It’s one of my all-time favorites. (Grades 3-8)

– In the first book of the series, four orphans, each gifted with a special talent, are enlisted by the mysterious Mr. Benedict to help save the world from the evil brainwashing plot of Ledroptha Curtain. Each book in the series has the children facing new challenges in which they need to use their talents to overcome. The books are filled with riddles and puzzles that the reader can solve along with the characters. Action + problem solving + adventure + friendship = great books! (Grades 4-8)

Because of Winn Dixie by Kate DiCamillo – There was a movie based on this book, but as always, the book is better! Opal and her preacher father move to Naomi, Florida where Opal happens upon a stray dog she names Winn-Dixie. Winn-Dixie is a dog who smiles, which I think is hilarious. Anyway, throughout the summer, Winn-Dixie helps Opal befriend some eccentric people in her new town; from the elderly librarian who fought off a bear to the local pet store owner who serenades the animals with his guitar. Opal learns about the power of forgiveness, to not judge others by their appearances, and that unlikely friends can become like family. This is a touching story and a great read-aloud book – if you can make it through without happy crying, which I couldn’t. My kids make fun of me, but it’s okay. (Grades 2-8)

This site uses Akismet to reduce spam. Learn how your comment data is processed.